On Monday 5th March we took our Hack To The Future event, 80 Year 8 pupils (aged 12/13years old) and about 30 adults to BBC Media City, Salford. The aim was to provide another opportunity for children to engage with digital creators of today, and raise an awareness of the potential that computing science offers to children.

This time we planned three sessions for children to engage in, and we enlisted the help of an army of geeks to make it happen. Although we have recently been working with a community of digital creators, developers and computer scientists close to our school in Preston – I wanted us to hold an event closer to Manchester to meet some more geeks and widen our ‘net’. With the very kind permission of the BBC and generous co-operation from Jo Claessens and her team, we were able to use some of their spaces to host our event.

Please click here to visit our planning document and learn more about the organisaton of our day. We split our pupils up into three groups – A, B and C and then the groups took it in turns to visit each session in turn.

In our “Robot Creator” session, children were treated to a demonstration of a Dalek that responded to instructions from an episode of Dr Who before going on to create their own brush bots. A brush bot is a miniature robot with a toothbrush head as a body and a mobile phone vibrating motor coupled with a button cell battery as the method of propulsion. It was fascinating to see how pupils customised their brush bots adding character to their creation.

In ‘Meet The Geek’ children were divided up into smaller groups of 2 – 4 and during this one hour session, and in ‘speed dating fashion’ they met a number of different geeks representing a large field connected to computing science.

Children only had 5 minutes to meet each geek. Clearly this was just enough to leave a deep impression on the children. Later on the coach journey home, they compared and shared the facts, secrets and stories they garnered from the geeks they met. 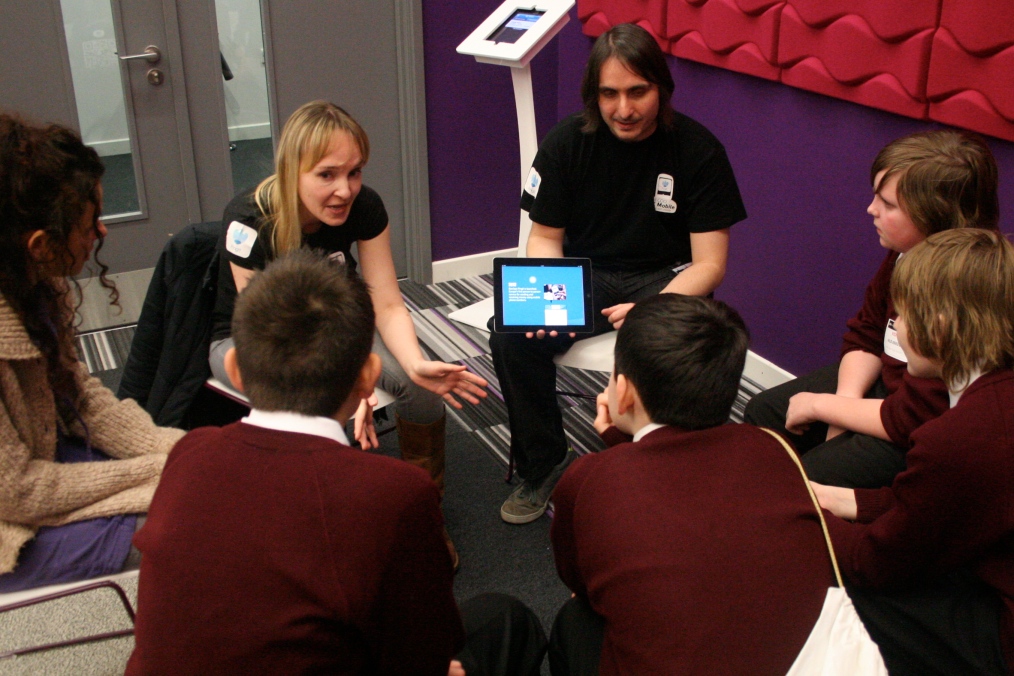 Our geeks included developers from Barclays Bank, a variety of BBC staff, independent software developers, undergraduate students, and staff from Double Negative the London based visual effects studio who travelled up Manchester especially to support the event.

Each geek was asked to bring a prop to help children guess the geek’s background, one team brought actual film props from the Harry Potter and the Deathly Hallows movie as well as props from a film not yet released, this caused much excitement among the children. It was also suggested that the geeks try a game or ice-break activity to start their 5 minute chat.

In “I’m a Game Designer”, children were first treated to a display of work from Uclan BA (Hons) Game Design students and their course leader Bev Bush.

Children were then challenged to propose some design solutions to real games and app problems. The session ended with a show and tell in which children presented their design proposals to the rest of the group. It was no surprise that many children commented afterwards how they enjoyed the design challenges. There is clearly a lot of potential here for future game designer sessions.

Polling pupils for their opinions at lunch time and later on the journey home, it was clear that all sessions had been received extremely well by the children. There did not seem to be one clear winner over the other sessions. The most frequently asked question by pupils was “When is the next one, Sir?”

I knew that the day had fulfilled its aims when I heard children say that they were now considering a career in digital creation and computing related fields as something they aspired to, when before the event they had not expressed an interest in this. Many remarked that they now feel inspired to go on and create and sell their own apps.

It needs acknowledging that this event could not have happened with the generous support of an enormous group of people – the fantastic staff at the BBC who trusted us and helped us organise the event rooms, security, refreshments and other procedures. While this was an enormously enriching, once-in-a-lifetime experience for our children, it is worth adding that bringing 100+ visitors into buildings where there are live broadcasts taking place presents immense organisational pressures on the BBC staff so particular thanks must go to Jo Claessens and her team for ensuring that all of this happened as smoothly as it did. Immense gratitude also needs to be shown to the geeks who voluntarily gave up a day of work (many of them unpaid) to help inspire the next generation of developers and digital creators.

UPDATE 19Oct2014: I used this blog post to refer to at an event I was speaking at this week. It’s a while since I looked back at it. What struck me was how many of the children who attended this event are now studying GCSE Computing. I’ve not got the exact statistics to share, but nonetheless – it’s amazing to look at my current Year 11 GCSE Computing class and see how many participated in this event, such is the legacy of this event. This was the very first time we tried the ‘Meet The Geek’ activity -it’s incredibly how many of those geeks are still supporting events like Hack To The Future, Raspberry Jam, Jam Packed etc.